My name is Don Hoyt [P’14]. I believe the work [the Philander Chase Conservancy] does for Kenyon is tremendously important, which is why Bonnie [Hoyt P’14] and I specifically support it, in addition to donating to other Kenyon programs.

I went to college at a peer institution, which in 1966, when I matriculated, was in a small rural village not much larger than Gambier. There was a post office, and a couple blocks of commercial development (on only one side of the street), and to the northeast was a beautiful, idyllic, almost Platonic ideal of a college campus — sort of like Kenyon, but with Federal architecture.

Unfortunately, due to the creation of a local lake as a hydroelectric reservoir on the outskirts of town, and the development of the area as a place of recreation and retirement and/or second homes for people living around the nearest city — coupled with the building of a major interstate — my alma mater is now nothing more than an outer suburb of a major city. The campus is engulfed by suburban sprawl.

I don't want the same thing to happen to Kenyon, which is why I believe the Philander Chase Conservancy is so important. I realize Kenyon is somewhat more protected from change than my college was, but change is inevitable, and who knows what things will be like in 100 years? I tell people, when I'm trying to convey what Kenyon and Gambier are like, that if Jane Austen could be transported into the future and arrived in Gambier, she would probably look around and say, “What a charming little village.”

Below is a photo I took near Kenyon on October 13, 2011, when we were up for Family Weekend. The photo was taken on a short unpaved road that turns to the right off of Grove Church Road maybe half a mile south of the church. As we were driving by I glanced down the road and saw the color and thought, “This is worth a stop.”

Thanks for all you do, and good luck during the year ahead. 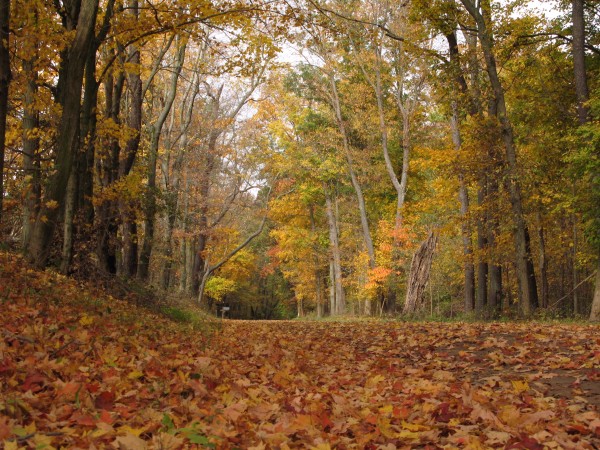