The Age of Learning 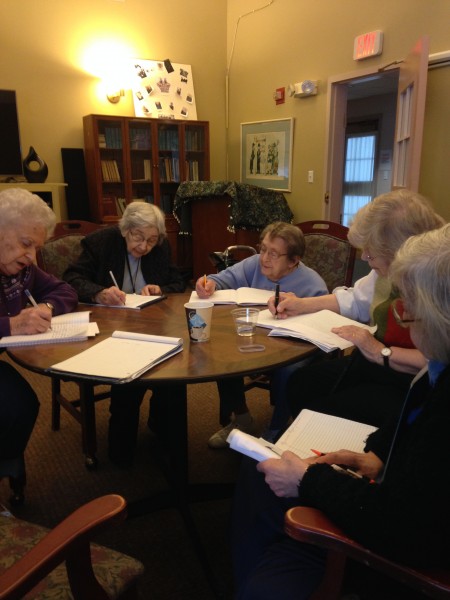 Once a month I lead a writing workshop at the senior living facility where my mother lives. My mom is 94, sound of mind but hard of hearing, and all of those who show up to write and talk have some deficit or other. Some repeat themselves, others barely speak up; some tell stories that shock me or make me laugh. I have a core group of regulars, but even my stars can change from month to month. Unlike college, the participants make no commitment to attend the class and there is, of course, no grading. I lose them to naps, television, doctor visits and death.  But when they come, when they are sitting there, there is commitment. Last month I posted a photograph on Facebook of a group of five women (all just under or just over 90) sitting at our round table, writing. No one was looking at the camera — their faces and hands were involved in the serious business of writing in their speckled composition books. I got more Likes on that photograph than anything else I’ve ever posted, including pictures of my adorable cat. I think it was the almost palpable intent and concentration that appealed to my Friends. The women were writing about their prized possessions, and the subjects ranged from a set of canisters given long ago to a daughter-in-law, to family photographs, to religious rituals.

The difference between teaching young children and teaching adults has been written about a lot, and we’ve all heard the standard comparison of how adults “really want to be there” and children would often rather be somewhere else. I don’t know about that, not having taught young children much; but I have two kids of my own in their early 20s, and I have (albeit years ago) taught at the college level. I think most of these students almost desperately “want to be there” also, and although the reasons may differ from those of their grandparents or great-grandparents, much is the same.  At my daughter’s Kenyon graduation last May I sentimentally imagined four years of intense concentration in the library and on bluebooks; at holiday break, I watched my son peering into his laptop screen as if willing interesting and available internships to appear.

Like the elderly, college students are worried about their futures, they are worried about money and security, and they long to matter in the world. Of course, paying for a class is different from just showing up in the Social Center mid-afternoon. And concern about one’s GPA so one can get into a good law school is a concern none of the elderly have. On the other hand, the facility is very expensive and I know my workshop regulars — almost all of whom lived through the Depression and all of whom worked for a living — are sobered by the thought of the thousands it costs to keep them warm and fed and entertained. And, as with the young, old people still want to do something that will make the world a better place, even if they can no longer practice law or instruct their children. In both groups, certain subjects emerge again and again: longing, depression, jealousy, regret. Fortunately, there is also hope, delight, humor and love.