Christopher Zarka of Kanoehe, Hawaii, has spent most of his professional life as a swim coach, winning Michigan’s Swim Coach of the Year Award and leading the Barracuda Swim Club to a national championship. He holds a bachelor’s in zoology and a master’s in marine biology.  Christopher is the proud father of Maria, Kenyon class of 2016, who is majoring in film and diving for the Ladies, and Kaimana, who hopes to swim in college one day, too. His wife, Kamelia, is a captain on the Boeing 717 for Hawaiian Airlines. 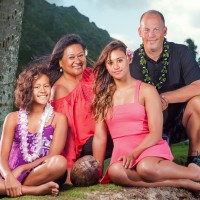 I penned a letter to my daughter, Maria, just before she left for Kenyon the fall of her freshman year. Since leaving her home in Hawaii to make a new home in Ohio, Maria has completed two eventful years of college: declaring a film major, earning a 3.5 GPA, collecting two national diving championships, and being named NCAA Diver of the Year. While she certainly doesn’t need my advice on how to write an award-winning essay (she did that) or how to dive for another country in the Commonwealth Games (she’s doing that, too), I believe there are some words of wisdom only a parent can bestow.