Our Quixotic Quests for Utopia U.

If anyone asked my (then) four-year old daughter what she wanted to be when she grew up, she’d simply answer, “A horse.”  If my first child had responded this way, I would have patiently explained the biological reasons that made this option impossible. If my second child had said this, I might have laughed it off with an affected neigh. Since the youngest was my third child in five years, I had only a flicker of energy to ask, “what kind?”  She then described the purple horse she would become, with a fuchsia mane, a horse that was both a fast runner as well as a high jumper. “Wow!” I said, smiling, “Go for it!”

I remembered this conversation fourteen years later as I was driving her hundreds of miles across the country in search of Utopia U. It took me seven years of college searches with my three very different (I know you know) children to learn a basic rule: that virtual reality is just as valid a part of the search process  as test scores, grades, and tuition expenses. Over these years, I’ve come to accept that my parental role is like that of Sancho Panza to Don Quixote, listening hard and believing the impossible until I share a vision of each student’s dream.

It wasn’t always so. We began the search with our eldest quite logically, as if we were solving an algorithm. She found colleges to fit her personal numbers (grades, test scores, school size, class-professor ratio desired, number of core credits required, application due dates) while I listed numbers that concerned me (tuition, books, tuition, room/board, tuition, flight home, tuition). Endless hours were spent trying to merge these numbers to determine the magic formula that would equal admission. By spring break, we had narrowed the list to ten colleges in New England, so we carefully planned out our first round of college tours accordingly. The whole family packed into the minivan (dogs included--what were we thinking?) and we toured two colleges daily for a week. Our math just didn’t work; two colleges a day wasn’t twice as nice:  It was double the pain with half the results. We soon learned that visits aren’t about math at all--they are about story.

My daughter hadn’t had any time to talk with students on campus, or hang out at the coffee shop or the dorm to feel the spirit of place. We resolved to make summer visits with fewer family members and more time to breathe.

The challenge of summer visits turned out to be finding enrolled students on campus as most go home for the long break. Some always managed to turn up, though.  When hang-out time was needed, I was not.  Like Sancho, I was merely the sidekick--a Knight of Hopeful Countenance awaiting the cell phone call that told me where to meet her when the visits were over.  I spent time reading long novels in bookstores. Only when we were back inside the car with the windows up, did I dare to ask about the visit. I disciplined myself to listen, to withhold my opinions, as her answers came slowly with reflection.

She enjoyed hearing adventure tales about how each student found that college, and comparing other schools they’d been interested in. All these stories were responding to an essential underlying question, “Do I fit here?” although the question was never directly asked.  She did manage to focus on her favorite four schools and we managed to return for overnight visits to each in the fall when more students were on campus to share stories. During one of those overnights, she became certain of her top choice. When she was admitted there in the spring, she accepted immediately. Many of her friends were dashing around in April trying to figure out their favorite school, and I resolved to start the next search even earlier so we’d never be scrambling to make a late-April decision.

Read more of Anna Duke Reach’s story in “I’m Going to College—Not You!”, edited by Jennifer Delahunty, dean of admissions and financial aid at Kenyon College. 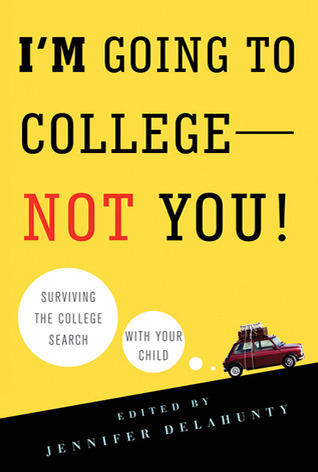