Anna Duke Reach grew up in faculty housing on several college campuses, where she enjoyed lively communal living as long as there was a tree to climb when she wanted to read. Hailing from Washington, D.C., Anna graduated from Colgate University and moved to New York City to work in publishing at George Braziller, Knopf, and The Metropolitan Museum of Art. Between children and moves, she's worked in arts administration for the Atlanta Olympic Committee, The Columbus Museum of Art, Jefferson Center for Learning and the Arts, as well as Thurber House. With all three of her children now launched into the world, Anna and her husband moved to Gambier, Ohio, where she works at Kenyon College as the programs director for the Kenyon Review. She is happy to have come full circle, returning to life on a college campus.

Our Quixotic Quests for Utopia U. 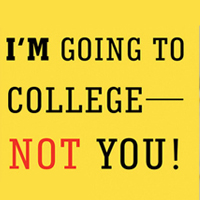 It took me seven years of college searches with my three very different (I know you know) children to learn a basic rule: that virtual reality is just as valid a part of the search process  as test scores, grades, and tuition expenses. Over these years, I’ve come to accept that my parental role is like that of Sancho Panza to Don Quixote, listening hard and believing the impossible until I share a vision of each student’s dream.