The weather is warm, dry and sunny. Everything smells wonderful, and students can be seen lounging around in Adirondack chairs or on the lawn outside Peirce. Kenyon in September is a pleasant, sleepy haven.

But not for long.

SOON THE SWARM WILL BE UPON US. 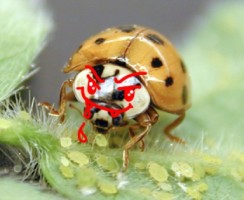 When I came to Kenyon I thought ladybugs were cute. Cute. Now, I shriek and quiver in horror whenever one of the vile creatures crosses my path. I loathe them. I despise them and all their ilk. And if you don’t yet, you will soon.

You see, I’m from the Pacific Northwest, and our ladybugs are the harmless, pleasant ones — the ones that are red and not (shudder) yellow. When I first came to Kenyon, I had a good month or two of bug-free bliss. I remember telling my friends, “Wow, there are no gross bugs here! I haven’t gotten a single mosquito bite!”

Oh, how wrong I was.

See, if you’re not from around these parts and you’re a city slicker like me, you might not have run into what is known as the Asian Lady Beetle (Harmonia axyridis), or what I like to call Flying Hellspawn. Every year around mid-to-late October, these... things hatch. Suddenly, what was a peaceful, relatively bug-less campus will be covered in ladybugs.

Asian Lady Beetles have several characteristics that distinguish them from their normal, non-hellish cousins. For one thing, they bite. They won’t just do it defensively, or because they’re hungry. They’ll just do it because they’re pure evil. Thankfully, the bites aren’t dangerous and don’t hurt.

But wait, there’s more! When killed or startled, they ooze an orange-colored paste called isopropyl methoxy pyrazine. This paste is actually their blood (again: demons), and not only does it smell awful, it also acts as a pheromone that calls other Asian Lady Beetles to it. So if you kill one, five more will show up, you kill them, 10 more, until the pheromone scent is so strong that they’re everywhere.

So, you can’t just squish them, because that does more harm than good. You can’t spray them, because for some ungodly reason they’re resistant (but technically not immune) to bug spray. You can’t sit in your room and pray they won’t get inside and find you, because their sole reason for existing is essentially to get inside your house and hide until winter is over and they can emerge and resume terrorizing everyone.

“But they’re not all bad!”  — probably some annoying scientist somewhere.

Fine. Maybe they have one good use. They were introduced to the U.S. as a means to curb the aphid population. One of the chemicals they secrete can also be used to treat microbial infections in humans.

If you’re thinking about coming to Kenyon, don’t let the lady beetles deter you. You only have to deal with them for a couple months in the fall, and then they tend to hibernate over the winter and spring. Also, if you go to college anywhere in the Midwest, they’ll be there too. Just don’t get caught off-guard like I was, and be prepared for a lot of ladybugs come October. Maybe bring some bug spray. And seal your windows in the fall to make sure they can’t get in that way, because lord knows they’ll try.

But in a few years, if President Decatur is usurped by an army of Asian Lady Beetles who then take over all administrative functions at the college ... 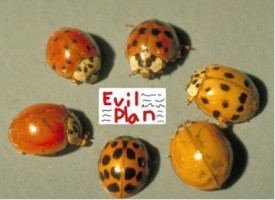