There comes a time in each senior’s life when they must complete their Senior Exercise. A comprehensive examination known to Kenyon students as “comps,” these are exercises orchestrated by each separate academic department to draw on the knowledge acquired during a student’s entire time at Kenyon. Comps are hard to put in a box because each department has its own take. Where one of my friends, an econ major, takes two cumulative exams covering everything he has learned, another, a drama major, must star in his own production (“Dying City” was incredible, Chris!).

As a History and Modern Languages and Literatures (MLL) double major, I am tasked with two sets of comps. For my MLL comps, I am analyzing the intervention of Putin’s government and the Assad regime in the Syrian Civil War. One of the most interesting and perhaps best examples of my growth at Kenyon is my analysis of Putin’s speeches. I have gathered speeches delivered by the Russian president during his third term, translated them and critically analyzed them. I am tangibly able to see my growth as a Russian student by being able to read these speeches and give my critique and comments on them. Mind you, I spoke no Russian when I came to Kenyon.

For my history comps, I am expanding on a project that I originally began my sophomore year. I am looking at the shifting relationship between the Russian Empire and the Muslims who lived within its boundaries. I started this project by looking at the relationship of Voltaire and Catherine the Great in regards to their discourse of Islam and Turks. I then expanded this original question during my time in Russia. I was fortunate enough to visit Istanbul (pictured above, during a cruise on the Bosporus), and when I returned, my host father asked me how my time in Constantinople had been. This sudden instance sparked my knowledge, and now my question has developed so much more: what was the relationship between the Russian Empire and the Ottoman Empire, and how has that influenced the contemporary diplomatic situation between Russia and Turkey? 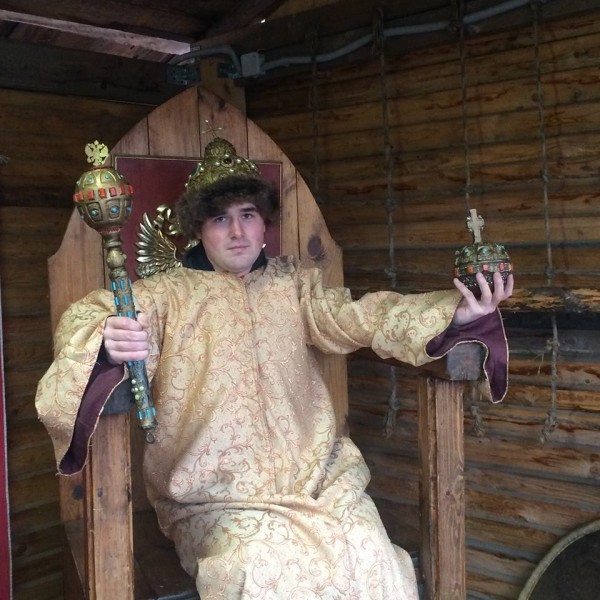 Me, dressed as a Russian tsar.

Working on my comps has been such an incredible and eye-opening experience for me. It has given me time to reflect on my growth academically at Kenyon, while also exploring things that I have been interested in for a long time. While it may sound to underclassmen and prospective students like just another hoop to jump through, in my experience, comps have been a valuable opportunity to demonstrate my academic prowess.