Being in the second week of my freshman year, I was weary to accept this as a nickname, particularly from an older student administering me a language placement test. I nevertheless replied positively.

“It is you! Tommy Selden told me about you, I went to Campbell Hall with him.” I had almost forgotten the presence of urban kids within this small rural campus I was still adjusting to. This was comforting. “There’s a Horn Gallery meeting tonight, if you want to meet some folks and check it out. Oh, I’m Lily, by the way.”

That evening, I arrived to the Horn Gallery five minutes early and found myself among a few other freshmen who had arrived at the same place in different fashions. Eventually, a small crowd formed, seated in a circle on the floor, and two students explained the function of the Horn as a venue for student and visiting artists. As I looked at the long-haired, short-haired, bearded, pierced, shaved faces around me, I knew it would be my first of many sights of the Kenyon arts scene.

“My name is Oliver Pearson, he/him/his, I’m from Los Angeles, and I’ve been listening to a lot of Slowdive and Roy Orbison lately.” Whether I mentioned those two artists at the time I do not remember, but to get an idea of who I am, I thought I should mention here that it’s what I’m listening to right now.

I learned about the Horn’s practice room, as well as to always show up to Horn Gallery committee meetings at least 20 minutes late. What the committee did not learn about me was I came to Kenyon with an intent to major in economics, and had no motivation to take a music or art class.

Months later, I would no longer attend these meetings, busied by schoolwork, jobs, and daily band practices with members whom I’d met within the committee. When I returned to the Horn Gallery, it was for a student band showcase, which revealed to me all of the musicians throughout Kenyon’s landscape whose talents rarely are exposed to greater audiences.

With a lost interest in economics, cuffed pants, and carefully chosen ballpoint pen and notebook, I headed out to my first Kenyon Collegian arts section meeting in Peirce Hall. I signed up for the arts section to blend my new interest in writing with my search for the pulse of Kenyon’s artistic community.

When none of the available assignments satisfied my curiosity, I returned to McBride Residence Hall article-less. I had written for the news section of the paper without passion the prior semester, and like my Principles of Microeconomics course, I planned to leave it in 2018 for the time being.

That night’s scroll through Instagram notified me of news that would change the course of my next two months: The short documentary “Period. End of Sentence” had been nominated for an Oscar, and Ruby Schiff ’21 was credited as an executive producer. Immediately I texted Ruby, as she is a good friend of mine, and the editor of the arts section with an idea to write a student spotlight on her and how her work earned the attention of the Academy.

One week later, I picked up a copy of the Collegian and found my story on page seven. Yet my involvement was far from over.

Ruby was teaming with Cinearts — a film group associated with the Gund Gallery — to plan a screening for “Period,” and invited me to moderate the panel. I knew better than to hesitate on any chance to further my involvement in the arts community at this point, and I happily accepted. To want, I discovered, was the only preliminary to being in the Kenyon arts community.

With the same cuffed pants and carefully chosen notebook, I sat before the Gund Gallery auditorium more curious than when I had begun my journey at the Horn Gallery. I did not know enough about women’s menstrual and reproductive health to moderate a panel including Ruby; Misha Rai, Kenyon Review fellow and visiting English professor; and Jenna Wojdacz, community education manager for Planned Parenthood of Greater Ohio.

I thought about just telling everyone that I’m from Los Angeles and like to listen to Slowdive and Roy Orbison, and that I’ve never taken a women’s and gender studies course in college. I could only listen and laugh and contribute what I knew between speakers. And I think ultimately this was appreciated by those in the audience, staying within the purview of my own expertise: the journalist.

But these introductions were irrelevant, so I mustered the same sense of curiosity as I had in my microeconomics course and Horn Gallery meetings. Despite my prior knowledge of the discussion, I decided my only route was to be the most enthusiastic audience member even while sitting center stage.

The applause subsided and I took a short, audible breath. “Ruby, what have you gained from the personal experiences and involvement with the documentary? How far are you, or do you feel, from where you began?” 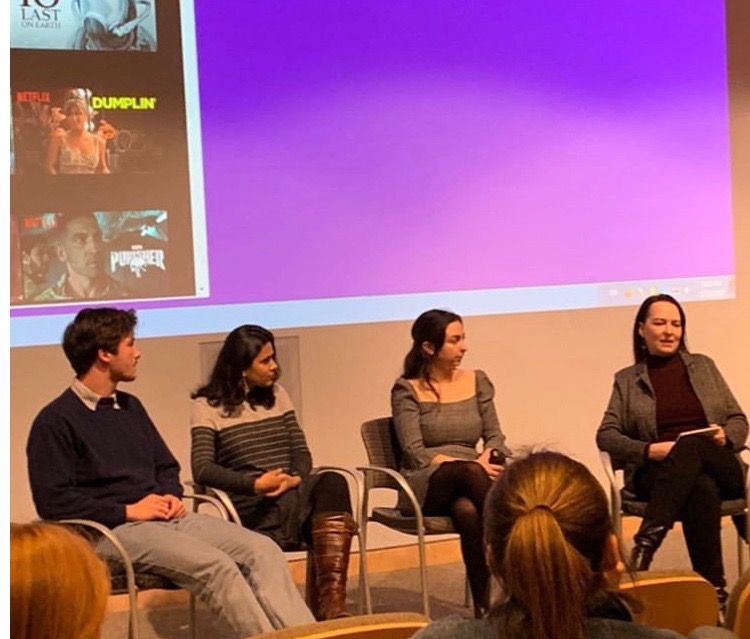