From Gambier to Georgia and Back: A Chamber Singers Travelogue

Since the beginning of the school year, the Chamber Singers have been rehearsing five days a week in preparation for our spring break tour. This year, we toured the Southeastern U.S., and I documented our trip from Gambier to Georgia and back, including our four concerts and all of the bus ride games, baby chick sightings and sweet tea drinks in between.

7:30 a.m. (Almost) all 55 chamber singers arrive outside Storer Hall, bleary-eyed and carrying baggage filled with cough drops and snacks. We pile onto the bus, waiting for a few stragglers to arrive. As an eternally carsick woman, I sit up front, across the aisle from Doc Locke, our conductor. Eventually, the bus starts and we wave goodbye to Gambier. On the bus, we review music for the upcoming concert and play “Name That Chamber Singer,” a game in which the answers to a questionnaire sent out previously to all the singers are read aloud on the bus, and we guess who wrote what. Questions included “What’s your favorite piece?” and “If you were a vegetable, what kind would you be?” I personally picked the Brahms and asparagus, in that order. 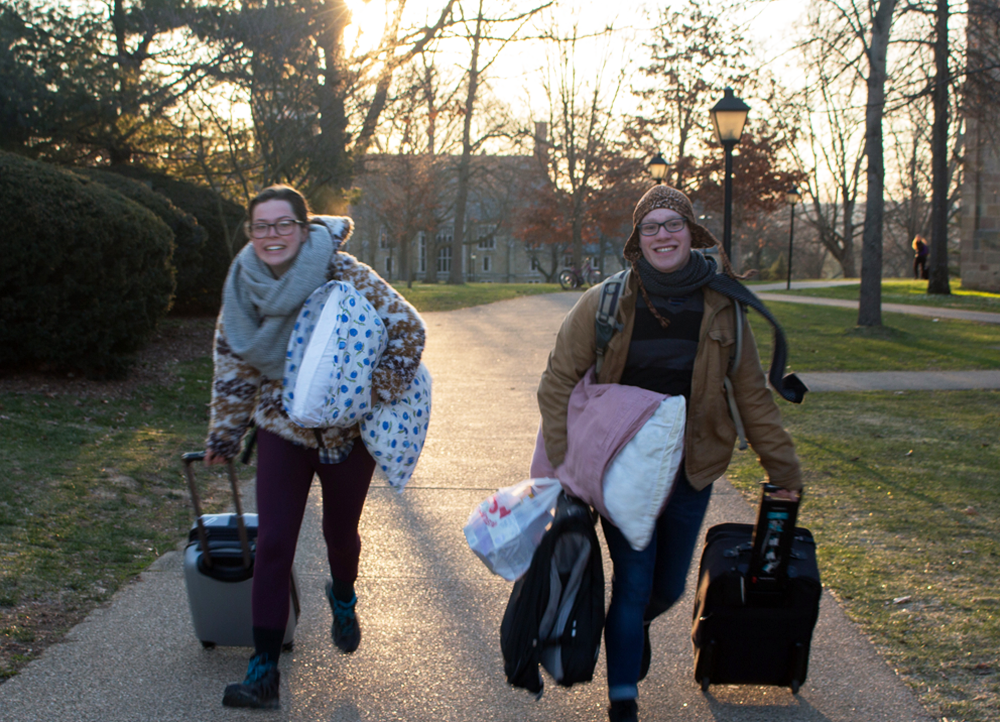 7:30 p.m. Our first concert begins at the Holy Trinity Catholic Church in Washington, D.C. We memorized our program, so by the time we were about to sing, I was worrying about remembering the song order. Thankfully, we were all able to remember the order, and the concert went smoothly. 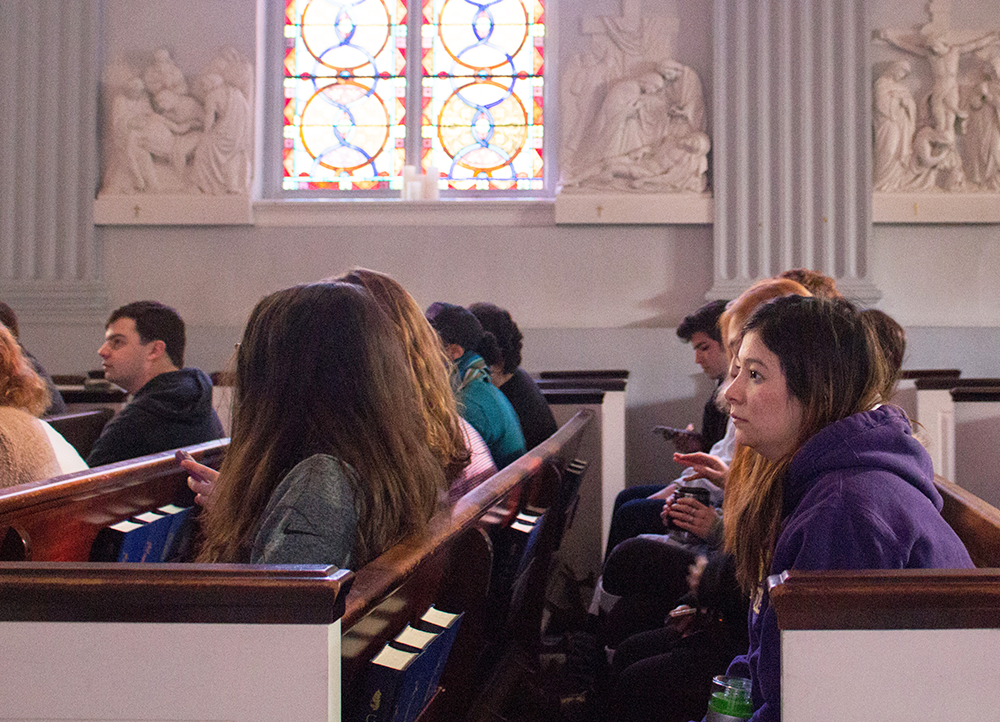 1 p.m. After four hours of driving, we stop for lunch in Durham, North Carolina. My friends, Andrew and Henry, and I go to Chubby’s Tacos, and are not disappointed. I order two veggie softshell tacos and a grapefruit soda. In a stroke of genius, Henry orders queso dip for the table. After we’ve eaten our fill, the three of us stop by a farming store advertising live chicks. We find the chicks around back. Predictably, they are cute. Predictably, we freak out. We contemplate adopting a baby chick as our tour mascot, but ultimately leave without purchasing any fowl.

9:30 p.m. My hosts in Winston Salem, North Carolina, give us wonderful vegan snacks (everyone at our homestay this particular night had a diet restriction) while we play with their dog, Katie. I observe Katie jump astonishing heights into the air in pursuit of a snack, and am duly impressed.

9 a.m. About an hour into our bus ride to Emory, Virginia, we stop at some large outdoor gardens. I wander into a greenhouse, and find some succulents that would be perfect for my dorm room but would be terrible to cart around on a bus for another six days. I reluctantly leave the plants and wait in line with 20 other singers for the one single-stall bathroom before hopping back on the bus.

5 p.m. We eat dinner with choir students at Emory and Henry College. We are going to perform a song together at the concert, so we chat about singing and college life. They have a cappuccino machine in their dining hall, but no panini press can be found.

10 a.m. It’s a long drive today, from Emory, Virginia, to Augusta, Georgia, so along with reviewing notes about the music and playing “Name that Chamber Singer,” we watch a movie: “Shrek 2.” Highlights include Julie Andrews voicing the Queen and the American Idol featurette.

7:30 p.m. We perform at a beautiful church in Augusta, where people have the thickest southern accents I’ve heard in my life (though my life has almost exclusively taken place in the Northeast). We go a little flat on some of the pieces, but overall the concert went well. My voice is beginning to get tired. I resolve to go to bed early. After the concert, our hosts point out historic buildings as we drive to their home. The houses in this area are enormous, with big wrap-around porches and balconies. I try sweet tea for the first time, and am immediately hooked. 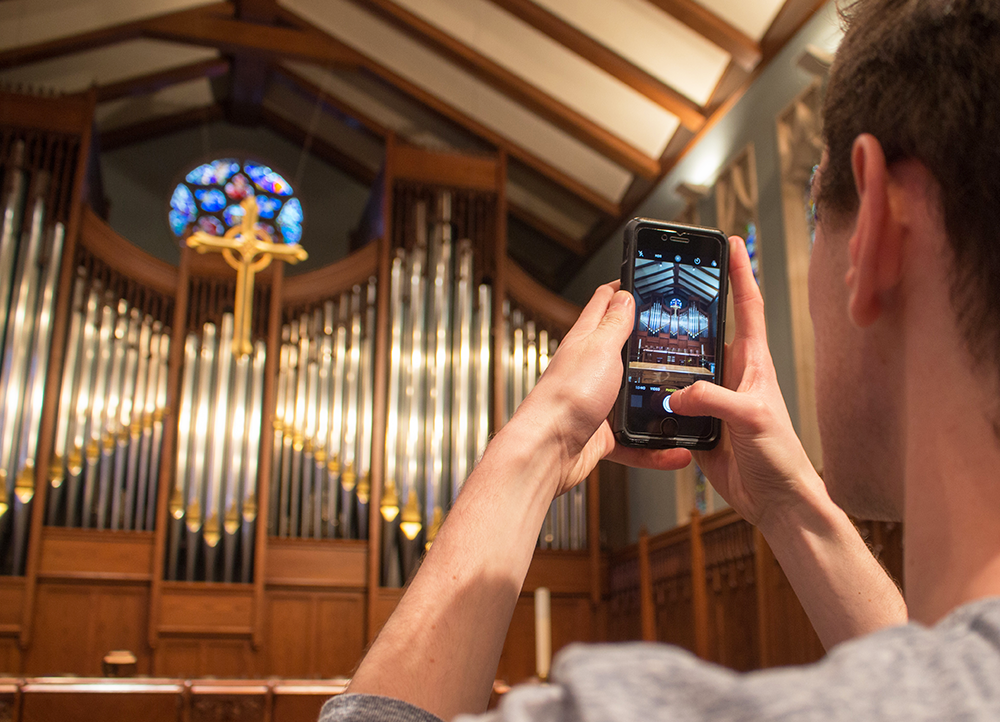 1 p.m. Since we have a short two-hour drive from Augusta to Atlanta, the choir indulges in another tradition: laser tag. My team, the Laser Rats, wins our first game, though tragically I have the lowest overall score. For the sake of my pride, I abstain from playing a second game, instead opting to buy bubble tea at a neighboring store and call my parents. The weather has gotten noticeably warmer: it’s in the 70s and the trees are already blooming. 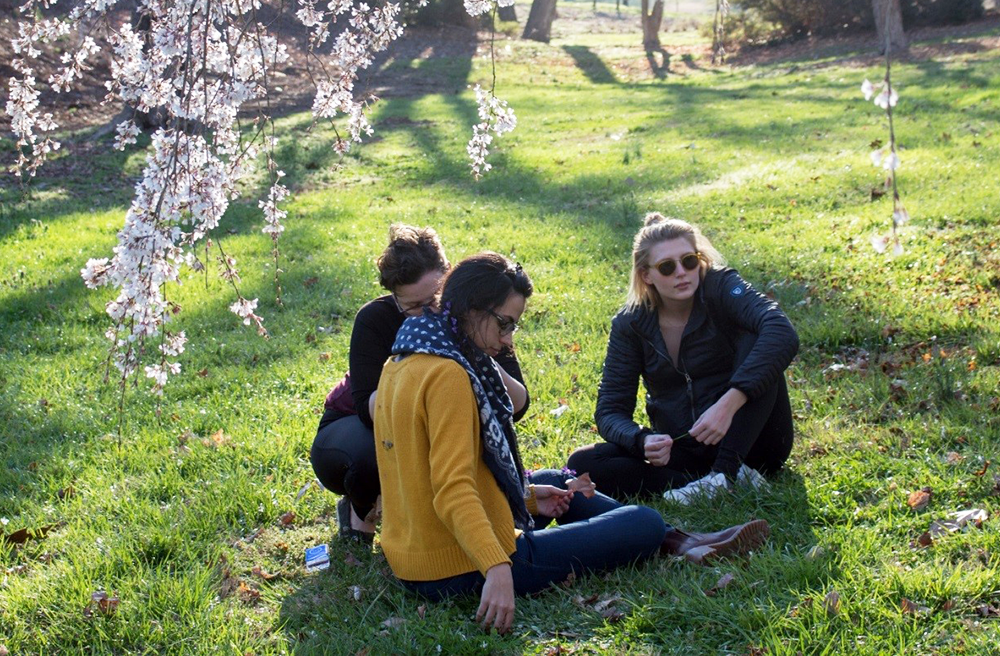 10 p.m. Six of us are hosted by my friend Andrew’s family friends. Strawberries and guacamole and other snacks are foisted upon us as we sit and talk about the ethics of singing certain songs and (gulp) what we plan to do with our lives. One perk of going on tour, for me at least, is meeting a lot of dogs, and this stop was no disappointment. At this house, we meet Ned, a two-year old pup with an active nose. We stay up late talking and eating, eventually crawling off to bed with tired voices and full stomachs.
Thursday, March 9

11 p.m. We stop in Chattanooga, Tennessee, on the way to Brentwood. After wandering around the bank of the Tennessee River, some of us duck off to Ben and Jerry’s and get milkshakes. Dairy is technically not the best food group for your voice, but the shake was a comfort to my aching throat, if only temporarily. I’m now actively trying to preserve my tired voice by talking less during down times and by drinking lots of liquids, especially tea.

4 p.m. A few friends and I wander around the area by the church in Brentwood and find two small graveyards from the 19th century that are almost overgrown by the surrounding woods. One headstone was in the process of being swallowed by a neighboring beech tree. Back at the church, we eat pizza for dinner and swap stories.

3:30 p.m. After a long bus ride and a quick rehearsal in the sanctuary of Union Church in Berea, Kentucky, some of us wander around the town. Berea College resides there, and it reminds some of us of Gambier. After a quick stop in a coffee shop with free WiFi, my friend Sean and I eventually find ourselves in a fudge shop. I buy a few dark chocolate turtles for myself as a last-concert treat. An of-age senior purchased one of the shop’s delicacies: moonshine balls.

9 p.m. As the concert draws to a close, Doc invites any Chamber Singers alumni to the stage as we sing the Kokosing Farewell, our closer for every concert. It’s the last time the seniors will sing this on tour, so almost all of them are crying by the last verse. It’s an emotional night, but a good one — one I know I’ll remember for a while. Everyone hugs, and eventually we all separate to meet our various host families for the night. 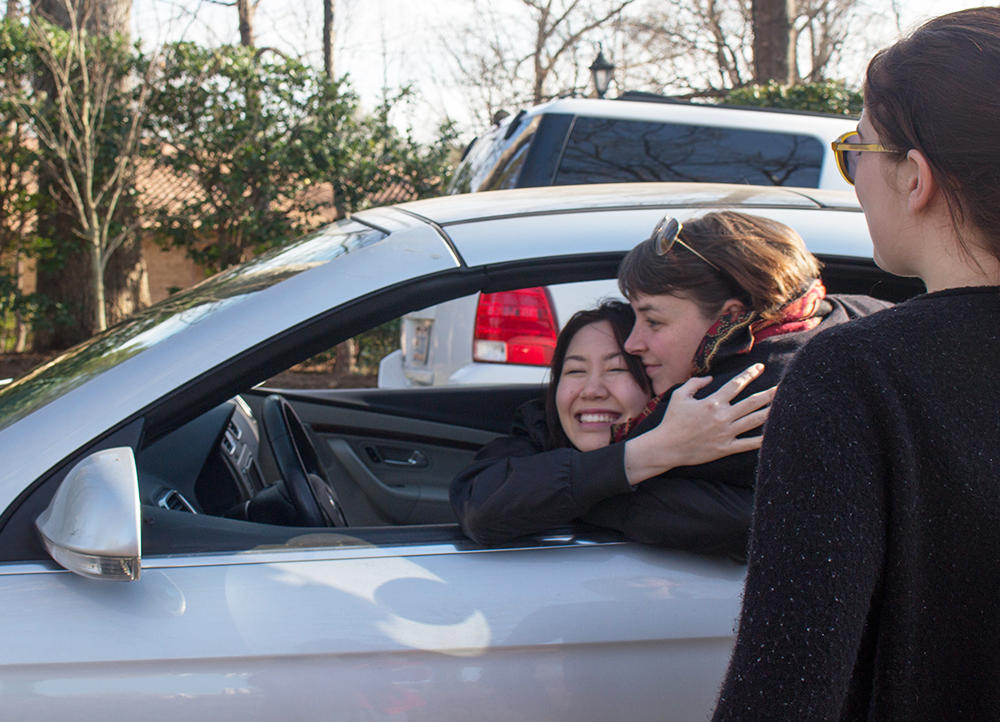 9:30 a.m. The bus drops off those catching flights at the Lexington airport. About 20 of us are left on the bus after the drop-off, so the drive back to Gambier seems a little cozier than our other drives. We watch another movie: the original “Shrek.” It’s a nice trip down memory lane (the jokes and the soundtrack both hold up, surprisingly), and coincidentally, we entered Gambier just as Rufus Wainwright’s cover of “Hallelujah” began to play in the film. No one said anything, but I think we all felt a little misty. It was a relief to get back to campus, to cook for myself and shower in my own shower, but the ending of something is always a little bittersweet. Next year will be my final Chamber Singers tour, and while every year is different, I know some things will remain constant: everyone will stress before the first concert, and everyone will cry after the last one. Somehow, that seems just right.