I’ve known my friend Claire since we were 3 years old, when our moms signed us up for toddler ballet and gymnastics lessons at the local community center. During the break between classes, we shared our snacks with each other. Over the next 15 years, we spent hours trotting up and down the hill that separated our houses or talking on swings at the park. Our families cooked meals and played Pictionary together. Whenever I was sick, I called her mom, a pediatrician. And when we were seniors, even though we went to different high schools, when we walked our dogs around the neighborhood, we talked almost nonstop about college.

Claire and I had somewhat different plans for college — she was interested in STEM, and I found myself more drawn to the humanities. She applied to schools almost exclusively in California, while I didn’t apply to one school in our home state. She always planned on going to a big university, whereas I knew that I’d thrive in a smaller community. Our college choices represented our differences perfectly — she ended up at UC Berkeley, and I found myself here at Kenyon. 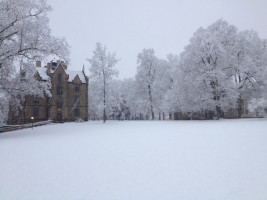 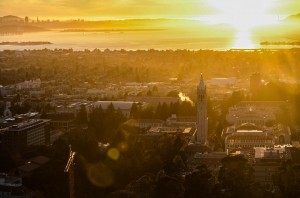 During the two years that we’ve been in college, we’ve kept in touch through frequent Skype sessions (during which we sometimes watch Supernanny together — don’t judge) and lots of postcards featuring our respective, picturesque schools. But I’m always excited when I’m home for break and Claire’s still in school — when I can drive 45 minutes to Berkeley and spend a day or two seeing what life is like at an urban school of more than 25,000 students.

I visited Claire in her on-campus dorm last year, where we played board games with her hall and ate at one of four dining halls. This year, I stayed in her off-campus apartment. I went with her to two classes, attended a Harry Potter trivia night, and tried some popular Berkeley food — ice cream sandwiches, grilled cheese, and cinnamon rolls!

One of the classes we went to was a public health seminar — although “seminar” at UC Berkeley means something rather different than it does at Kenyon. There were over 650 students in this class that met once a week for three hours in the evening. Each week, two guest speakers came to the class and talked about issues related to health and medicine; students then had the chance to ask questions in a Q&A session. The week I was there, the topic was abortion. The speakers were Dr. Malcolm Potts, a UC Berkeley professor, who took a pro-abortion rights stance, and Canadian anti-abortion presenter Stephanie Gray. In the three-hour discussion-turned-debate, each presenter voiced his or her opinions, research and personal stories before taking questions from students. It was fascinating, and Claire and I kept talking about the presentations the whole way back to her apartment.

Walking back to her apartment was an entirely different experience from walking around at Kenyon. Berkeley is a proper city, with speeding cars, sirens and people everywhere — people who, in many cases, aren’t college students. At Kenyon, the majority of the people we see walking down Middle Path are our friends, classmates, professors and administrators. Walking down a busy city block populated with strangers to get to and from class feels, in some ways, much more like living in the real world than walking through quiet, rural Gambier.

Choosing between a big school and a small school is all about managing tradeoffs — each has advantages that the other doesn’t. Claire can take thousands of classes from 170 departments — classes in languages like Mongolian and Cuneiform, classes that offer weekly guest speakers, classes that focus so much more in depth on one subject than we can in a standard class at Kenyon. But Claire can’t always meet with her professors one-on-one when she has a question or spend an hour chatting with them about something outside of their field of study, because UC Berkeley professors have far more students with whom they need to meet. Claire can choose to eat whatever type of food she feels like just by walking a few blocks downtown, but she’s also subjected to the chaos of city life that’s absent at typically tranquil Kenyon.

When I look at UC Berkeley’s class catalog, sometimes I wonder what it would be like if I had that many options for what to take. But I know that even though the subject matter would be interesting, I wouldn’t like the large class sizes, the city life or the lack of professor accessibility. Certain people prefer and prioritize certain things when trying to find the perfect college, which is why it’s fantastic that no two colleges are the same. I feel like Kenyon was the best choice for me, and I think Claire feels the same way about UC Berkeley.

Read Part 2 — an interview with Claire on her perspective of Kenyon!