Kenyon’s campus looked a bit different as the last week of classes began and finals approached. In the cracks on the sidewalks leading up to Peirce Hall, red sand stood out against the pavement. As students walked to the dining hall for meals, they couldn’t help but notice the disruption of their familiar environment. Every time I heard someone asking about it, I smiled. The other members of Not For Sale and I had placed the sand there specifically to draw the attention of our peers.

As some of the most well-traveled sidewalks on campus, the paths leading up to Peirce were the perfect place to engage the Kenyon community in the Red Sand Project. This video made by the creator of the project, Molly Gochman, inspired Not for Sale to join her effort to call attention to the 36 million people worldwide who live in modern slavery today. Gochman started the Red Sand Project in 2014, encouraging others to help her literally spread awareness about the children, women and men who metaphorically “fall through the cracks” and become victims of human trafficking.

Her vision for these installations was to “remind us that we can’t merely ‘mind the gap’ and walk over the most overlooked and marginalized populations in our communities. ...These populations [especially immigrants, runaway and homeless youth, and victims of previous violence] are most at risk of being enslaved, spending their lives being exploited for the profit of others.”

When I first brought the idea up to Not For Sale, the other members were excited to join this project; however, we weren’t sure how the Kenyon community would react. Once I began to finalize the plans for the project, I felt more confident that it would have a positive impact on campus. After reaching out to Steve Arnett, the director of facility operations at Kenyon, to ensure we had the college staff’s approval to place the sand, I was pleasantly surprised by his enthusiasm. He helped us pinpoint spots for the sand that would be noticeable but also allow for easy cleanup. 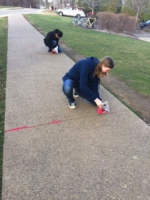 While placing the sand, passersby frequently stopped to ask about the goal of the project. Granted, the sight of people pouring red sand into cracks probably warrants a question or two, but it was encouraging to see other students’ reactions and hear about their interest in the project. For instance, after the sand was in place, one of my friends who had not previously been involved with Not For Sale messaged me on Facebook to say she was glad we had participated in this project. She also shared an article with me that discussed Ohio’s move to become the first state to require prospective truckers to receive training about the signs of human trafficking, which I then posted on the group’s Facebook page.

The project successfully captured students’ attention, and I was impressed by the amount of support Not For Sale received for this event. This small act of placing sand sparked a conversation on campus that helped us continue to inform the Kenyon community about human trafficking and the movement to end modern slavery, which was exactly what we hoped for.

If you want to learn more about the Red Sand Project or human trafficking, here is a link to the project’s information packet that provides facts and statistics about modern slavery.