Rocket Science is Not That Hard

Rocket science is not that hard, or at least at Kenyon it isn’t. Of course, I’m talking about Professor Benjamin Schumacher’s Physics 101 class, built for non-physics majors but taken by all who wish to launch rockets on the rugby field for credit. The class structure is as follows: we learn how rockets have developed from pioneering backyard scientists to modern companies like SpaceX. Along the way, we incorporate the equations and forces that are the basis for the physics behind everything from takeoff to space travel.

Students are of various mindsets on the subject of rocket science going into the class. Some are taking this to fulfill their quantitative reasoning or natural sciences requirements, some, like me, are just trying to take a class with Professor Schumacher before they graduate, and others have been building rockets in their backyards their whole life. My study-mate Nick Kaufman, who is currently on a Fulbright grant doing research in China, described the class as “physics for poets,” which holds true.

As described by Professor Schumacher, Rocket Science is riveting. The class is a room full of students oblivious to the laws of physics, which means it doesn’t take a whole lot on Professor Schumacher’s part to blow our minds. This phenomenon visibly excites him; he’ll stand to one side of the projector screen bouncing on the balls of his feet while we ask our questions about the universe in the middle of his presentation. Professor Schumacher is a theoretical physicist who specializes in quantum information theory. He’s an important researcher in that field, as seen on his Wikipedia page. It’s hard to describe how remedial Physics 101 is compared to his vast knowledge of the universe. Regardless, he is continually delighted by our class’ questions.

My favorite example of this is when we talked about the moon. During the Apollo 11 mission, Buzz Aldrin and Neil Armstrong got to go walk around on the moon, while Michael Collins stayed in orbit, so they could get back home. Our class discussion was about which of the astronauts drew the short stick on the Apollo 11 mission. Any sane person would probably say it was Michael Collins, who did not get to be one of the 12 humans to ever walk on the moon. However, as a student in the row beside me pointed out, Michael Collins got to be the first human to travel to the dark side of the moon. This got Professor Schumacher bouncing on his toes. From there, we uncovered that Michael Collins was, at that moment, the most isolated human in history, which is kind of cool in its own regard. 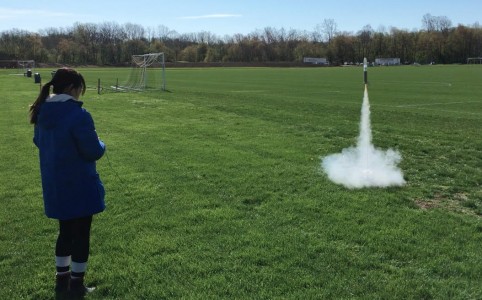 These ‘oh wow’ moments were frequent in class. We needed to know the math and do the problem sets, but our class tutor at the Math and Science Skills Center made that part of class pretty easy. Our big project was to launch a model rocket on the rugby field, and you got an A on the assignment if the rocket took off and flew (a pretty low bar). Mine, built along with Juvi Rivera ’19, is pictured at the top of the page. The point of the class was to excite us all about physics, and I came away with several ideas along this theme. As a part of a different Apollo mission, a few astronauts got to drive the moon rover. I don’t want to go to space, but if I had to, I would 100% want to drive a car on the moon. That sounds awesome.