The Curious Incident of the Dog in the Scene Shop

I know it might sound biased, but I have a favorite co-worker (sorry, Laurel). His name is Cooper, and he works with me in the Bolton Theater’s scene shop along with five other students. He’s a first year, very sweet and always eager to say hello or lend a paw. I should have led with that — Cooper is a dog.

This fall, my boss (the formidable Chris Ellsworth ’96) came into work with what he thought was horrible news: his daughters had talked him into getting a dog. The rest of us were thrilled, even if the only interaction we would have with this new puppy was cute pictures every once in awhile. Of the six student workers in the scene shop, most of us have some animal at home that we love dearly.

While we’re at school, we inevitably miss them — a lot. I have a 10-year-old boxer/lab mix at home, and one of my biggest adjustments to college was not having her around. Even four years later, when I’m at school, I miss taking her on walks, curling up with her while watching a movie and sneaking her scraps from the table. In talking to my coworkers, they feel the same way about their cats and dogs, so imagine our excitement when Chris told us that his new puppy would be joining us at work everyday. 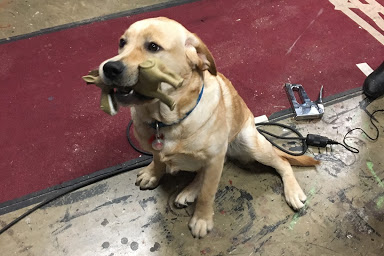 At first, we were a little shocked — a puppy hanging out around power tools? Sounds like a recipe for disaster. When Cooper first came to the shop, however, we found that it would be quite the opposite. Cooper has a penchant for being the most unusually chill puppy I’ve ever met. Rather than bark at loud noises and lie down in inconvenient spots, the worst he’s done is sneak around the theaters and rip up a bunch of cardboard. He’s found his way into a few classes in the Hill Theater next door, and has recently made a new friend in Talullah, the big fluffy cat who graces the costume shop with her presence daily.

For the students, the best part of having Cooper around is the reminder of our own pets. Whenever I’m having a bad day, I know that when I show up to work, Cooper will be waiting there with a slobbery kiss for me, and that never fails to improve my mood. My other friends have caught onto Cooper’s effect, too. Friends who have never before been inside the Bolton have traipsed down the hill to say hi, and usually they end up sticking around to help paint or assist on the sets as well!

Luckily, Cooper’s not the only animal around campus for students to fawn over. His sister, Rosie, can be found walking down Middle Path with her owner, Professor Baumann. Teddy, a 2-year-old fox terrier, resides in the economics department, while Heppy (a pug) holds domain in the English department and Finn (a golden retriever) in the anthropology department. Those who are more inclined towards felines can find Moxie wandering near O’Connor House, and Churro near Horwitz. 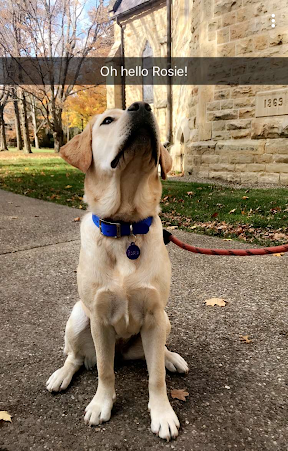 Working around Cooper has been one of the best surprises of senior year, and I’m incredibly grateful that I get to be around a dog, especially with the way he and other pets around campus help boost the moods of everyone around. Even if it means cleaning up a lot of dog slobber and making sure he doesn’t get covered in sawdust, having a community pet makes Kenyon feel even more like a home than it already is to me.