The Rules of Motown

I started playing trombone in fifth grade. I was a band kid in high school, sitting in the bleachers of the football stadium every home game, ready to play the fight song at a moment’s notice. I came to Kenyon knowing that I would play trombone here, but hoped to broaden my range of experience. Joining Kenyon’s Symphonic Wind Ensemble and taking lessons were things that I knew I was going to do, but I also joined Chamber Singers, started writing for The Kenyon Thrill, and became a member of the Outdoors Club.

Some of those extracurriculars stuck (Chamber Singers, the Thrill), and some didn’t (sorry Outdoors Club), but Kenyon gave me what I always wanted: the opportunity to try everything that I wanted to try, and the support I needed when I realized that I couldn’t do it all.

The longer I hung around the music department at Kenyon, the more options opened up for me on trombone. I auditioned to play in a senior’s comps performance, a conducted improvisation project, and as a result gained confidence as an improviser and performer. It was the first time that I’d played outside of a traditional band or combo setting, opening me up to the concept that the musical education I received at Kenyon was, ultimately, whatever I wanted it to be. As a result of that project, I met a lot of seasoned Kenyon musicians, one of whom invited me to come jam with a student-run group called Motown. They played covers of Motown songs—the world “Motown” here being used as a broad cover-all for whatever funk, hip hop, and yes, Motown songs they decided to perform—and they needed another horn player. I was game.

I came into the first rehearsal not really knowing what to expect. As I approached the rehearsal room, I could hear the album Songs in the Key of Love bleeding through the walls. After I unpacked my trombone, the other horn players showed me the ropes.

The energy in the room was exhilarating. As I pieced together the opening horn line to the seminal classic “Crazy in Love” along with a trumpet and tenor sax, the singer was humming to herself and the drummer was tapping the high hat, in a wonderful cacophony of music that was now just a chaos of separate parts but would eventually come together into one of our biggest crowd pleasers.

My first show with Motown could also be described as a kind of beautiful chaos. We played in the Village Inn, with people dancing less than a foot away from our mics (a sharp contrast to concerts in Rosse Hall). The Village Inn by day differs greatly from the Village Inn by night. The tables in the back room all mysteriously disappear, and the far end of the dining room becomes the stage, crammed between the bathroom and the kitchen. People responded to our music in a way I hadn’t experienced before. They were singing along to Marvin Gaye, screaming praise at the end of every song and solo. The crowd was indiscriminately supportive, no matter how sloppy the solo. We played into the early morning, and I went home with my ears still full of screams and laughter and bass lines. 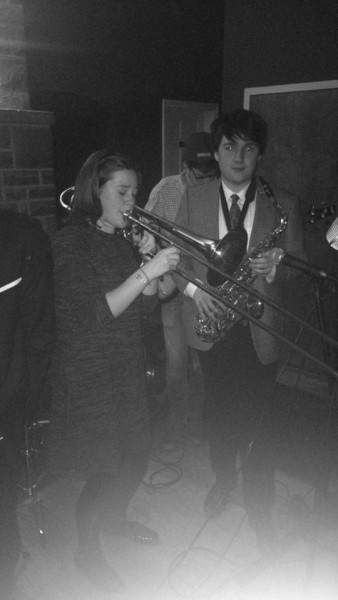 Motown had its first show of the year last weekend. Most of the people I played with my first year have graduated and moved on, but the group is as strong as ever. Last Saturday, the VI was hot and crowded, and, predictably, there wasn’t quite enough room for the band to set up. So we squeezed together, standing sideways at times to make more room, occasionally stepping back to grab a fresh breath of air. We played lots of new songs and some old ones. At the end of each, people cheered.

A lot has changed — our set list, our members — but some things will always stay the same: people will scream and dance, and “Superstition” will always bring the house down.