Where in the World is Jodi-Ann? #4: Homecoming

I’ve been MIA from the blog, and that’s because I just survived the most arduous semester of college so far. I mean it.

Growing up ethnically Chinese while being raised in North America, I felt foreign yet proximate to my Chinese roots. I can communicate with my parents in near-perfect conversational Chinese. But I most certainly did not possess the skills to analyze a complex academic topic in oral or written Chinese, something I was required to do during my semester at the renowned Peking University.

Some things are enjoyable the moment you encounter them. Others, you reap the joy much later, sometimes after a treacherous journey that constantly challenges your tenacity. You come out feeling a little brighter, walking a little taller and seeing the world a little differently.

Nothing quite compares to the adrenaline rush when you walk into the class you finally decided upon after a meticulous selection process. “Foreign Relations of the People’s Republic of China,” “An Introduction to the Politics, Economy, and International Relations along the Belt and Road,” “Foreign Policy Analysis,” “Political Economy of African Nations” — trust me, as an international studies major with a focus on East Asia and sub-Saharan development, who also just finished a semester abroad in Accra, Ghana, these titles sounded like rides at Six Flags. I knew these exhilarating subjects would also be accompanied by tremendous challenges to my linguistic abilities in a foreign academic sphere of great rigor.

Nevertheless, I was both excited and apprehensive about direct-enrolling at the nationally renowned Peking University School of International Studies, where the brightest of the nation are gathered. Never before had I walked into a classroom of 200 feeling a strange sense of invisibility, which was juxtaposed against the hyper-visibility of being stared at by 200 people, expecting you to answer a question just raised. Some other classes were much smaller in size and discussion-based, attracting students with defined academic focuses.

Regardless of the lecture style, all of these classes challenged my abilities to critically examine Sinocentric international policies while simultaneously conveying such thoughts in a language with which I am familiar only in certain contexts. I distinctly recall the interrogation one professor dove into when I discussed my previous experiences in Ghana to answer her question about each student’s previous connection to or knowledge of any African countries. The exchange lasted for about five minutes, but felt like the entirety of a three-hour lecture. I was the only “international” student, and my identity, characterized by the North American influence in my social interactions camouflaged by my Chinese appearance, and my previous experiences studying in Ghana, strapped me with a special set of expectations to meet.

The struggle didn’t end there. With final exams that counted for over two-thirds of my final grade, 10,000-word research papers and individual presentations, all done in my second language, the academic burden got exponentially heavier. It is at times like this — when the goal of aiming for academic success is clear-cut but the means to reach such a goal seem opaque — that I am the most appreciative of the academic skills embedded in my Kenyon education that armor me against any challenges I may encounter as a student. 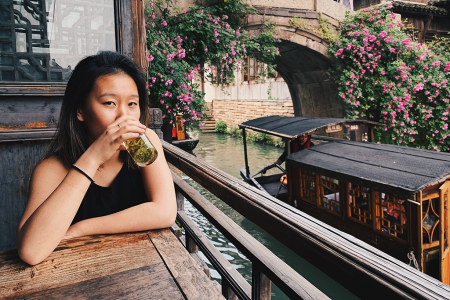 Holding different responsibilities, such as being a student worker, music scholar, Admissions Fellow, (incoming) senior class president, and co-founding Kenyon Asian Identities on the Hill has buttressed me with the management skills to juggle multiple commitments while staying on track academically. More than anything, being a Kenyon student underpinned me with the ability to face challenges, whatever they may be, head-on and with confidence. In Beijing, where exceptional academic obligations supplanted extracurricular commitments, in an environment totally different from that of Gambier, I realized that maturing in the Kenyon environment necessitates the ability to undertake responsibilities in different cultural, academic or geographic contexts and still be victorious, in whichever way one defines success.

Turning the last page of my junior year abroad, I am beyond elated to return to my home on the Hill. Where in the world is Jodi-Ann? Back in Gambier in just a few days!