Freshman Dorms 101: Helping You Fill Out Your Housing Preference Form

The research for this piece was compiled by Busola Olukoya

So, you’re an accepted-and-decided Kenyon student. Congratulations! Once you’ve gotten past the thrill of that thumbs-up on the outside of your envelope, you realize that the inside is actually stuffed with paperwork and there’s STILL more  college stuff to do.  One form that may be troubling you is the housing survey--where, exactly, will you call home next year?  We’re here to break down your five residence options with real student input and the most recent pictures.  Just remember, most people get their first option, and no matter where you end up, you’ll have a great time! 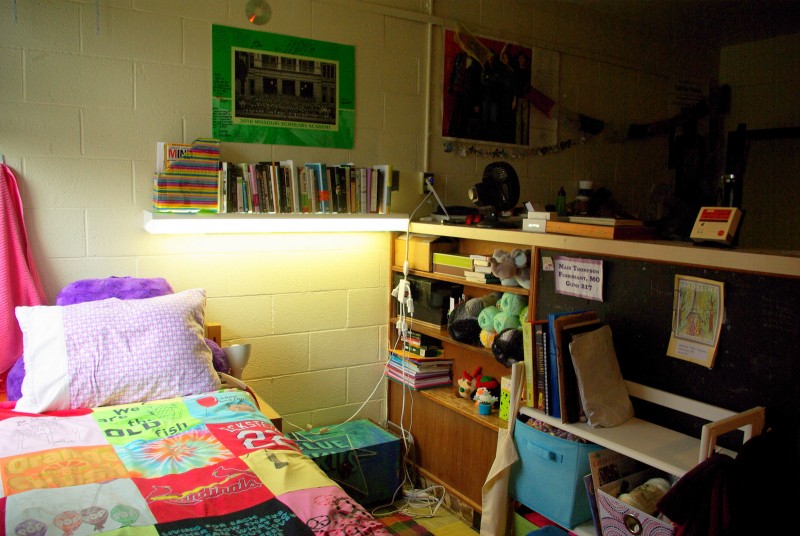 One half of a Gund double, featuring the classic divider

Located Northwest from the heart of Gambier, Gund (otherwise known as the Gunderworld) is home to the Gundergals, Gunderdogs, and Gunderlings of the freshman class. Gund is known for the classic divider that splits each room into mini-singles, and also doubles as a bookcase. Co-educational by floor, two-story Gund has additional lounges on each level with a hidden study lounge on the second floor. Gund floors are not carpeted, and there is no air conditioning here, so bring a fan for August and September!This hall is equipped with the only laundry facilities for the Freshman Quad, a microwave in the first floor lounge, a foosball table and a flat-screen TV in the Gund lounge.  This additional lounge, located at the front of the dorm, is the gathering point for many organized events, from ice cream socials to gingerbread house decorating to Superbowl/Oscars/State of the Union screenings.  Members of the class of 2016 say that they love it for the tight-knit community they were able to establish and for the fact that the divider helps you have your own room within a room. Things they dislike about the dorm include the fact that there is no AC in the dorm rooms and the allegation that “no one comes to visit you unless they live (or wished they lived) there.” 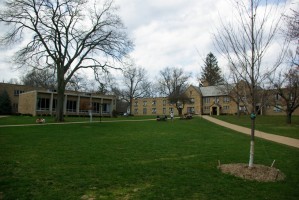 The Freshman Quad, featuring Gund on the left and Norton on the right 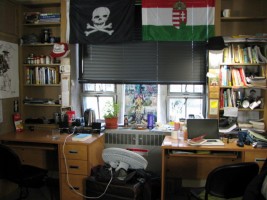 The study space of a Norton double, overlooking the Quad

Flanking Gund on the right and left are Lewis and Norton. These halls will be a lot like Gund- with single sex halls, big rooms and big windows, no carpeting or air conditioning--but without the dividers in the rooms, which can be a plus. You won't have a pseudo-single, but there will be more floorspace. Also, neither of these halls has their own laundry facilities, so you will be making the trek to Gund for clean clothes. Of the three dorms in the Freshman Quad, Lewis is closest to "downtown" Gambier, sitting next to the Post Office, and Norton is the farthest away. Freshmen living in both Lewis and Norton (sometimes known as the Lew Crew and Nortonites, respectively) say that the best thing about their homes is how quiet they are--perhaps a little too quiet at times--but definitely a relaxing place to return to at the end of the day. 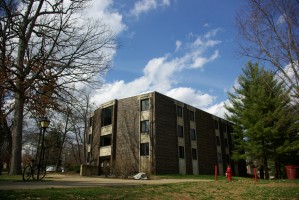 McBride as seen when walking from South to North

Facing off against the Freshman Quad are Mather and McBride, on the other side of Middle Path. These two are mirror images of each other, departing from the stoic, squareish layout of Quad halls for an angular, horseshoe shape. The hall layout is asymmetrical, with each floor having a majority of its rooms on "Long side" and still more on "short side," with a lounge located in between in "middle side." On the first floor, "middle side" is replaced with a breezeway, a frequent hangout spot and meeting place. The halls are twisty and narrow--you will hear some explain this as "riot-proof" architecture from the '60's, but this is a Kenyon myth--and the walls are cheerfully painted up with murals by former residents. (You can decide, as a hall, whether to keep the mural or paint a new one!) McBride and Mather are co-ed by room. Because of the irregular layout, some rooms will have more space than others, depending on whether you're in the middle of the hall or in a corner, and whether that corner angle is acute or wide. 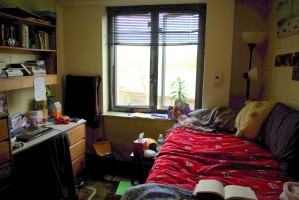 The lounges in Mather and McBride have couches, tables, and TVs, and the third floor lounge for each dorm is also a kitchen. Both dorms have laundry facilities, carpeting and air conditioning. McBride's perk is that it is the dorm closest to the Market and Deli, facilitating the late-night snack run. In years past, McBride has gained a certain reputation as something of a party dorm, although each incoming class will set its own norms to either confirm or challenge this image. The intermediary between freshman territory and the rest of North Campus, Mather is McBride's quieter twin; its upper floors are also home to some sophomores (and, in rare cases, juniors returning from abroad) who may feel a bit cheated by the Housing Lottery. A sloping lawn, complete with a tire swing hanging from a tree, extends behind Mather. 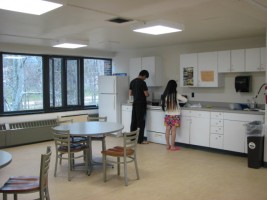 So, whether you get tickets to the Gund show or take it easy in McBreezy, there's a housing option for you. All the freshmen are quarantined on North Campus until you guys make friends; eventually, you will upgrade to the big boy/big girl options of Old Kenyon, the Acland apartments, or the NCA's, the new townhouses completed just last year. Of course, take our quick Freshman dorm stereotypes with a grain of salt: the people you surround yourself with, and not the architecture of your residence hall, will make your freshman year a success.