When I received a text from a friend offering me a ride to the Women’s March on Washington, politics were far from my mind. I was in the car with my dad; he was driving me to the airport for my flight back to Kenyon after a semester abroad. When I told him about the possibility of going to D.C., he said, “You have to. It’s a once-in-a-lifetime opportunity.”

I’m typically not one for marches, parades, rallies or other events that include large congregations of people. It’s not because I don’t care about causes or have strong political inclinations; it’s simply to do with the fact that I’m really not a crowd person. I don’t like strangers breathing on me or being stuck in the middle of a giant mass that feels impossible to escape. I’m used to news stories showing peaceful rallies suddenly turning violent, leading to arrests and injuries and other potentially dangerous situations. But even though I had some hesitations, I knew my dad was right — this was an opportunity I couldn’t pass up.

We left on Friday afternoon. During the course of the seven-hour drive, we kept checking the news, seeing photos and videos of airplanes and buses full of women bound for D.C. We listened to our “Female Anthems” playlist and shared the highway with many out-of-state license plates, the backs of their cars adorned with bumper stickers. We kept in touch with some of our friends who also were heading to D.C. More than 160 Kenyon students, faculty and community members attended the march; many took advantage of the buses organized by some amazingly committed Kenyon women; others, like us, drove with friends. We were able to stay with some Kenyon alumnae — our friends who graduated last year and are now living in D.C.

On Saturday morning, we squished down into the Metro with everyone else bound for the National Mall. From the moment we emerged into the light of the gray January morning, we were surrounded by people carrying creative signs, wearing iconic pink knitted hats, and sporting shirts proudly declaring various feminist manifestos. As the day went on, I became increasingly aware of the sheer number of people gathered in the same place at the same time, creating a space to stand in solidarity and support of the women — and the countless other individuals — whom our recently inaugurated president seems to believe are undeserving of the same rights as straight, white men. 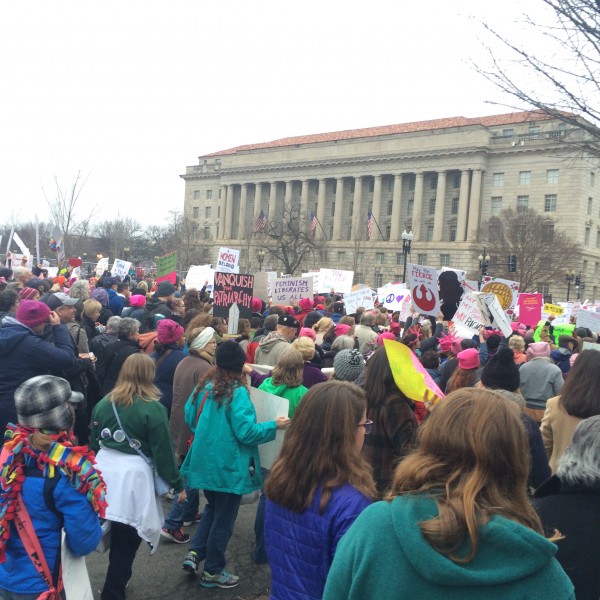 A scene from the march.

I have never seen so many people physically present in one place before — there were women, men and children as far as I could see in every direction. The organizers of the march predicted 200,000 people would attend; by the end of the day, several sources reported more than 500,000. There were no march-related arrests in Washington, D.C. I didn’t encounter any negative energy or hostility. Instead, people were kind. People helped each other, cheered with each other, marched with each other and supported each other. 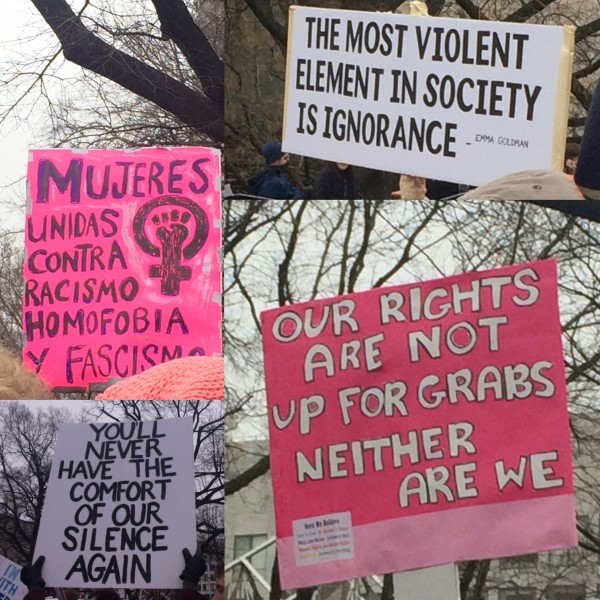 A selection of signs seen at the march.

The past week has been difficult for many of us who were dreading the inauguration. But seeing the community of people that came together — both in Washington, D.C., and all across the world — it was easier to feel hopeful. Marching may not have changed anything — it didn’t end racial discrimination or ensure funding for Planned Parenthood — but it did prove that people all over the world do not plan to sit passively and watch as our rights are taken away. It made a statement. It made those of us who needed it the most feel confident and powerful and heard. It made us ready to face the oncoming challenge of working with people with whom we disagree. It fortified us for the tough conversations that will arise — and here at Kenyon, we are spending every day in and out of class learning how to have those important conversations, with the hope that one day, equality will be a reality, and the necessity of marching on Washington will be a thing of the past.