Upper Lewis was a happening place my freshman year. We were particularly loud and rambunctious, but also very musical. Three rappers, several a cappella singers, a few multi-instrumentalists, producers, the list goes on. We could make a decent-sized playlist of music made by guys from my freshman hallway. For me, though, the most notable musicians are the ones I am still in a band with. We call ourselves Mark Twang, and in the past couple months we have released an EP and toured from Philadelphia to Ann Arbor, all while balancing classes and senior exercises. It’s certainly been a ride.

I’ve written before about how supportive the Kenyon music scene is for creative people, and that’s part of what made me so nervous about our tour. On campus, we could play a set where we completely flop and there would be no judgement from the audience. People are pretty accepting and open to anything, musically. This tour was my first musical venture off campus. I was happy to be doing it with guys I’ve known since my first day at Kenyon but terrified to be playing for audiences other than the one I’ve come to know and love. 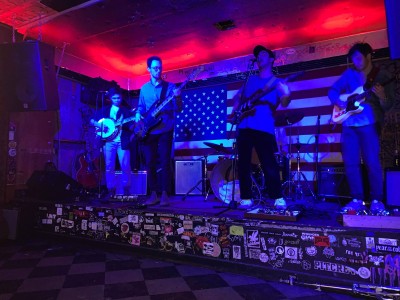 We kicked off the tour in Philly at a bar called Kung Fu Necktie, where our set was the most fraught with nerve-induced errors. On our way to the other side of Pennsylvania, we ran into the Owl Creeks, an all-women a cappella group on campus who were also on tour this winter break. We played a show in Pittsburgh to an audience that sincerely seemed to despise us, as we learned from their not-so-friendly banter. Very tired from sub-optimal sleeping arrangements, we drove to Cleveland for our Friday night show in a bar, not knowing where we were going to sleep that night. We played an awesome show on a bill stacked with talent, opening for a band called Sure, Machine, whose twinkly guitar lines and excellent lyricism made us forget how tired we were. When it was our turn to play, five members of the Chasers a cappella group walked into the bar, as they also happened to be in Cleveland for their own tour. Making the night even better, our friend Jeremy, a junior molecular biology major and hip hop artist, came through with a floor to crash on before our drive to Ann Arbor. 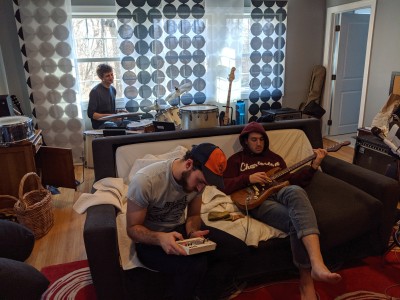 The most eventful night was Ann Arbor. We played a show in the basement of a house that was clearly never meant to be a music venue. On the way there, the weather was not cooperating, making the driving conditions awful and the prospect of having an audience at our show seem unlikely. The basement was only accessible from the outside of the house, where we trudged through the mud to get to a beat-up door. The room we played in wasn’t big enough for us to stand up in; we had to position our singer so that his head could fill the gap between the ceiling vents. Opening for us was a metal-core band, who brought their gigantic rig into this tiny unfinished basement. To a room full of people holding their earplugs in as far as they could go, the opener let loose with crazy drumming skills and spoken word screams coming at us full-blast through the PA. 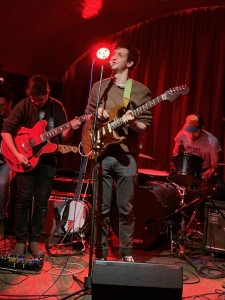 The Ann Arbor show was our most comfortable; clearly the audience was there to support small-time musicians as best they could, as confirmed by the jar they passed around for donations to our tour costs. We made some great friends playing our indie/country tunes to the seated audience in the brick basement; it felt like the same crowd that we play for on campus. Especially after experiencing Pittsburgh, the feeling of being supported by relative strangers was the best way to cap off the tour. It’s really awesome to think that these are just a few of the guys I spent freshman year jamming with. 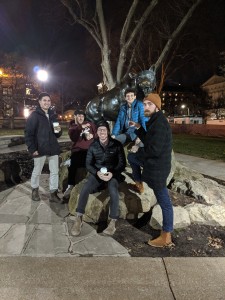 We went on tour to make connections and get our music outside of the indie-loving Kenyon music scene, and in that regard our venture was a huge success. We’re going to organize another concert with Sure, Machine, the band from Cleveland, and there are now many Mark Twang T-shirts walking around several states. Even more exciting is watching our number of Spotify listeners go up with every show we play. We ended the tour very tired, yet excited to record a full-length record and do it all over again in the next few months.