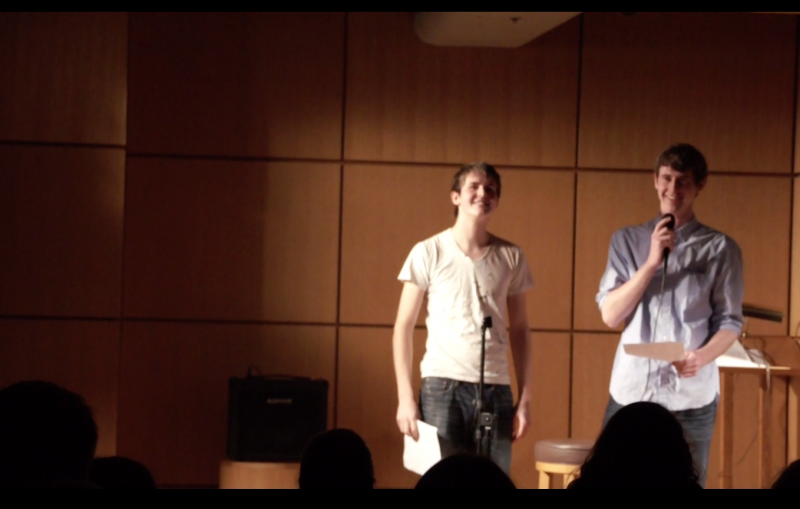 A Chevy Chase, Maryland, native, Mike Jest '15 can be seen performing in Two Drink Minimum, Beyond Therapy, and Fools on the Hill—Kenyon's three comedy groups. He's a really funny dude, and I had the chance to ask him some questions:

How did you become interested in comedy?
Well I basically learned to read so that I could read "Calvin and Hobbes" to myself. But I'm not sure if I thought of that as comedy. The first time I can remember specifically being interested in comedy was when I was around 8. I was in the living room building Legos or something and my mom had NPR on. They were playing clips of Steve Martin's standup and I was literally rolling on the floor laughing. I think I broke my Legos. I remember I said, "Mom, who is this guy?" And she said, "It's Steve Martin." And I said, "But what is he doing?" That's the first time I can remember experiencing standup comedy and I didn't even know what standup was. But after that point all I wanted to do all the time was watch or listen to comedy. For Christmas and my birthdays, I would just ask for comedy albums, so my parents got me Steve Martin, Bill Cosby, Bob Newhart (who's very underrated), Woody Allen, Jerry Seinfeld, etc. Later, I discovered "Saturday Night Live," so my parents would get me "Best Of" DVDs. They also clothed and fed me, but I think I'm most grateful for the comedy.

How did you start writing/performing comedy?
That being said, I never thought of comedy as something I could do. I don't think I ever was that funny growing up, outside of quoting comedy albums out of context to my friends. But when I got to Kenyon, I decided to give it a shot, so I auditioned for all the comedy groups, and Beyond Therapy (sketch comedy) let me in for some reason.

What about outside of Kenyon?
I hadn't gotten into Two Drink Minimum (standup) or Fools on the Hill (improv), so in the summer after my freshman year, I started writing standup and I took an improv class at The Second City in Chicago. My highest aspiration at that point was to be in the other comedy groups at Kenyon. But I really loved doing comedy outside of Kenyon, too, so this past summer I interned at The Creek and The Cave, which is an amazing, free comedy club in New York City. My boss there encouraged me to start doing open mics, which was really fun, and then I also went back to Chicago to take improv classes at iO.

What's it like being in all three comedy groups on campus?
I love being in all three groups. As someone who's obsessed with comedy, it gives me three different mediums to play with. I like that if I have an idea I think is funny, there's a good chance I can use it in at least one of the groups. Also, I think the caliber of talent at Kenyon is unbelievably high. I've gotten funnier by just getting to be around the comedy people here.

Do you have a favorite bit and/or sketch that you've done so far?
That's tough, I'm not sure I can choose just one favorite. But before my first Two Drink show, I was the most nervous I've ever been for anything, and coming offstage afterwards was awesome. It probably didn't even go that well (I sort of blacked out during it). But the pride of knowing that I had done it, combined with the relief of it being over, was an unbelievable feeling.