As I sat in Finn House a few months ago, going over some kinks in a floundering story with P.F. Kluge, the conversation drifted to the upcoming semester. I mentioned that I would be going to Cape Town. He’s been.

“You must go to Stellenbosch,” he said. He called it the Napa Valley of South Africa, pandering to my California roots. Stellenbosch is the wine country east of Cape Town; a gorgeous, sunny valley with quaint restaurants and colorful hills. It’s also a college town, home of Stellenbosch University.

Last week, I recalled that conversation as I sat in the back of the car on my way out to “Stellies,” as I’ve heard it called. The skyscrapers gave way to rolling townships, then Cape Town Studios, before dipping into the countryside. 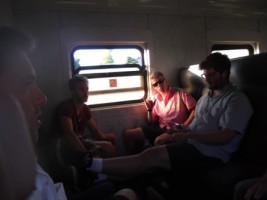 While in the center of town, you might mistake it for Ann Arbor or Champaign-Urbana, but the moment you listen in you know you’re in Stellenbosch. While English is the primary language in Cape Town, in Stellenbosch it’s all Afrikaans. Everyone is still fluent in English, but English-speakers definitely stand out more than they do in Cape Town. 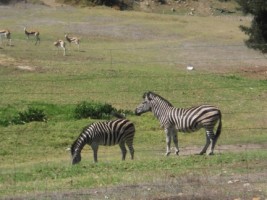 A fun night on the town with the college students died down, and the next morning we embarked on a vineyard tour. Our group, six college students (American), one retired couple (British), and two honeymooning couples (one Swiss, one Belgian) stood in awe of the first vineyard as we were greeted by zebras while we tasted delicious wines.

A few vineyards later, we had “method” or “sparkling” wine, which is made the same way Champagne is made (hence, “method”) but it’s not called Champagne because it’s not Champagne if it’s not made in Champagne. The wine was good, but the theatrics were better. They open the bottles here in a style that Napoleon used when he celebrated victories: with a sword!

We followed this vineyard with a delicious lunch of seared springbok and roasted vegetables and headed over to one more vineyard. The last vineyard had cobwebs that were over a hundred years old. Here we mostly tasted thick and sweet dessert wines before heading back to the train station for the ride home, bellies full of springbok. 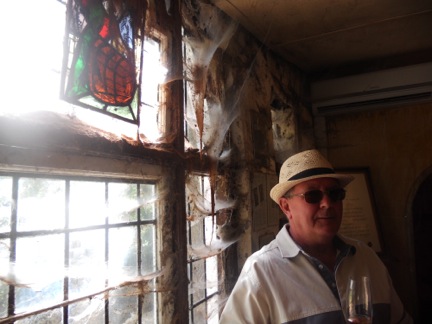