In It for the Long Haul

As Quintessential Kenyon bloggers, we are always trying to find the next topic for our writing. Carolyn and I, as seniors, have both considered writing retrospective articles about our time at Kenyon. In reminiscing, we remembered that we spent our entire sophomore year as roommates! A simple post about sharing rooms transformed into a reflection on our years at Kenyon together.

Meera White: Carolyn and I met in Spanish class our first year at Kenyon. I actually remember exactly what she wearing: beautiful striped socks. I thought, “That seems like a person I want to be friends with.” We eventually ended up working on the same video project together. We wrote the screenplay, shot, and edited the whole thing together with a few other classmates. That experience, along with studying for class quizzes, meant that we immediately became friends during our first year at Kenyon. When it came time to choose who we wanted to room with for sophomore year, we decided to embark on the adventure together.

Carolyn Ten Eyck: I remember seeing Meera on our first day of class together and immediately thinking “That girl looks cool.” Language classes at Kenyon always involve a lot of collaboration, in and out of class, so we bonded while talking in class about our lives (in Spanish) and while studying and going to AT (a supplementary language class taught by a student) together. On my flight back to Columbus after winter break, I ran into Meera at baggage claim. Both of us were waiting for the 9 p.m. shuttle, which meant we had more than two hours to kill at the airport. We ended up watching the movie “Se7en” together (it was the only movie I had saved on my laptop), which put us both in a weird mood for the drive back to Gambier, but cemented our friendship.

Meera: Carolyn and I chose a teeny double in Manning Hall. It was right across from Old Kenyon, so it was incredibly loud on weekend nights. I remember being a bit scared, because most of the other residents were older than us. I really loved being South, though, because it was close to Peirce and classes. Carolyn and I moved in together early and bumped Lake Street Dive on a little Bluetooth speaker. We spent a lot of time watching Netflix in our separate beds with mood lighting because we had twinkle lights and lamps. I infamously go to sleep on the early side, so Carolyn had to master coming in late with the lights off to not wake me up. To her credit, I rarely woke up (thanks, Carolyn!). A while ago, I asked Carolyn how she felt about us being roommates our sophomore year and she replied: “We were the perfect roommates for each other at that time.”

Carolyn: Both of us wanted to live south for our sophomore year, and because Manning had a laundry room it the basement, it seemed like the perfect choice. Meera and I had slightly different schedules (she went to bed at 10:30 on the dot every night) but we made it work. In retrospect, her schedule was pretty helpful to me, as it inspired me to wake up earlier and get my work done before midnight. I had worked at a sleepaway camp for girls the summer before, teaching arts and crafts, so sometimes before we would both go to sleep, we would do “Roses and Thorns” with each other, talking about the best and worst parts of our days. Our lives at Kenyon didn’t overlap a whole lot — we don’t share any extracurricular activities and we haven’t had a class together since Spanish freshman year — but living together meant we always knew what was going on with each other’s lives, for better or for worse. 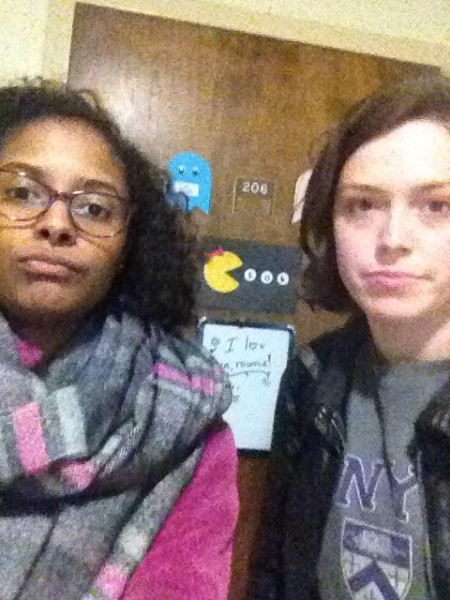 A brief escapade to visit our future room at the end of our first year before we moved in for sophomore year.

Meera: Junior year, Carolyn and I were no longer roommates, but we still found time for each other every now and then. When you live with someone, you get to see them all the time, so it’s easy to hang out. When senior year came around, we decided to make more of an effort. We find each other in Peirce to eat breakfast before Carolyn’s Spanish class and always tackle the New York Times crossword puzzle together. During Senior Soirée, we made sure to snap a pic to commemorate our former roommate status!

Carolyn: After having been roommates, it was a little strange to transition back into being friends without living with each other. Junior year, we grabbed meals and found moments to hang out in between our crazy academic and extracurricular schedules. We’re both really involved in a lot of things at Kenyon, which sometimes makes it hard to find time to see each other, but I think we’re both really supportive of each other and that foundation of friendship has seen us through a lot. Meera comes to all my jazz band and Chamber Singers concerts, and I read all of the amazing writing she’s done. Senior year, we’ve been grabbing breakfast together a lot, usually before my Spanish class (my first since freshman year). After a study abroad program in Arizona and Mexico, Meera has far surpassed me in her language skills. Sometimes she’ll help me out with my homework at breakfast, but mostly we’ll just talk. We’ve both changed a lot since sophomore year, but our friendship has been a constant throughout our time at Kenyon. We just love each other a lot, ok??? 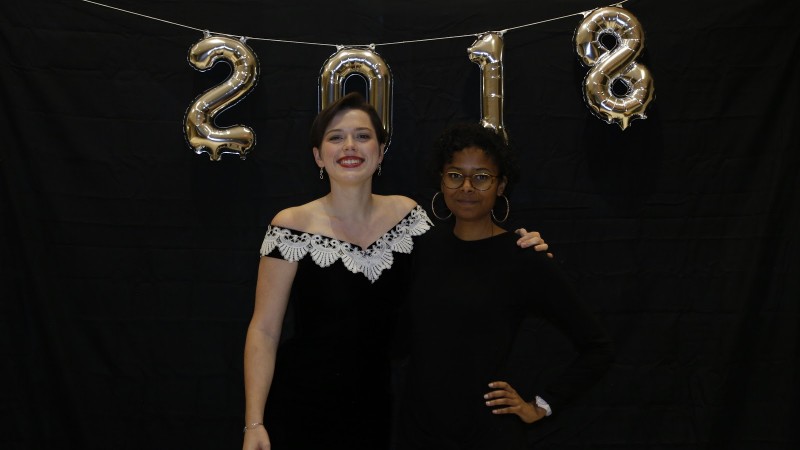 Carolyn and Meera at Senior Soirée. Meera was in the process of eating a cheese stick.